Continuous Glucose Monitors Help With Type 1 Diabetes at Any Age 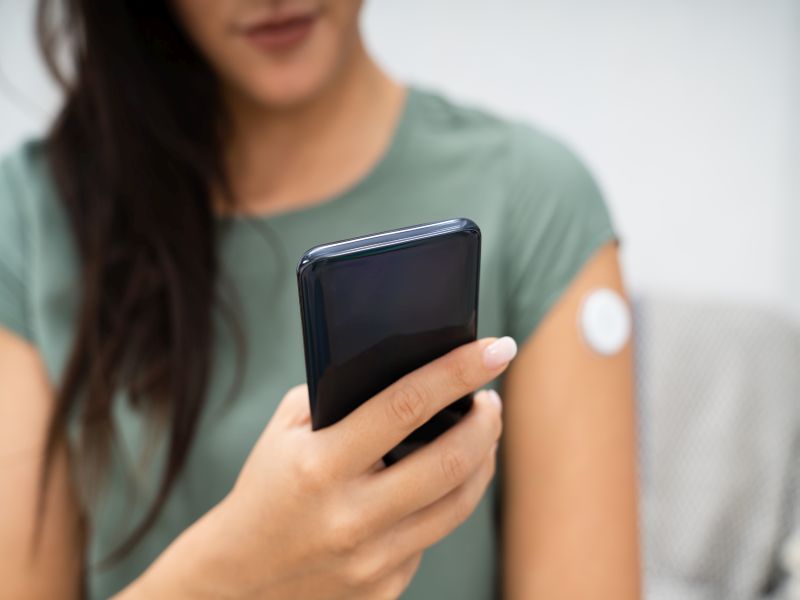 “The advent of continuous glucose monitoring (CGM) technology has revolutionized outpatient diabetes care in the past decade,” wrote the authors of an accompanying editorial, Dr. Shivani Agarwal and Dr. Anne Cappola from Albert Einstein College of Medicine in New York City.

Continuous glucose monitors measure the amount of sugar (glucose) in interstitial fluid. That’s fluid that surrounds the body’s cells. The devices can track trends in glucose levels and provide alarms when sugar levels are rising or falling too quickly, or if they are out of an acceptable range.

This information allows people with diabetes to adjust their insulin dosing or to have a snack to prevent hypoglycemia when glucose levels are dropping quickly.

The device consists of a very thin sensor inserted under the skin to measure changes in glucose and a transmitter that attaches to the sensor. The transmitter is held in place on the skin with an adhesive patch. The transmitter sends information from the sensor wirelessly to a receiver, smartphone, tablet or certain insulin pumps.

But replacing just the right amount of insulin can be tricky. Too little insulin, and blood sugar levels may remain too high. Over time, that can lead to diabetes complications, such as vision problems, kidney disease, nerve conditions and heart disease. But too much insulin can cause hypoglycemia, which initially causes uncomfortable symptoms, but can lead to unconsciousness, seizures and even death if left untreated.

As people age, they may not feel the symptoms of early hypoglycemia, such as shakiness and a rapid heartbeat. Some develop a condition called hypoglycemia unawareness.

The study included more than 200 people over 60 years of age with type 1 diabetes. Half received a CGM to monitor their glucose levels, while the other half checked their blood sugar with a standard blood sugar meter (using a drop of blood pricked from the finger).

The people on CGM had lower rates of hypoglycemia. The CGM group had glucose levels lower than 70 milligrams per deciliter, the threshold for low blood sugar, 5% of the time before the study began (about 73 minutes per day), and for less than 3% of the time during the six-month study period (about 39 minutes a day).

“There was a significant reduction in hypoglycemia for people randomized to CGM. There was also a reduction in unconsciousness, seizures and the need for medical attention. There was also an improvement in overall [blood sugar] control,” said the study’s lead author, Dr. Richard Pratley, medical director of the AdventHealth Diabetes Institute in Orlando, Fla.

“We learned that older individuals can use the technology to prevent hypoglycemia and improve their safety without compromising their [blood sugar] control. I think CGMs should be standard of care,” he said.

Medicare began offering coverage of the devices in 2017.

The other study included more than 150 young people with type 1 diabetes, who were 14 to 24 years old. They were randomly assigned to CGM or a standard blood sugar meter. The researchers, led by Dr. Lori Laffel from Joslin Diabetes Center in Boston, wanted to learn if CGM could help young people better manage their diabetes.

Dr. Gerald Bernstein is program coordinator at the Friedman Diabetes Institute at Lenox Hill Hospital in New York City. He said, “The use of CGM has been increasing but is nowhere close to its potential.”

Bernstein added that both studies showed “a small statistical benefit of CGM,” but he said that he expected the findings would have been more dramatic.

“My own feeling is that people on multidose insulin should use it along with a strong education program,” he said.

However, Bernstein noted that there may sometimes be barriers to CGM use, such as insurance issues and out-of-pocket costs.

The studies and editorial were published June 16 in the Journal of the American Medical Association.