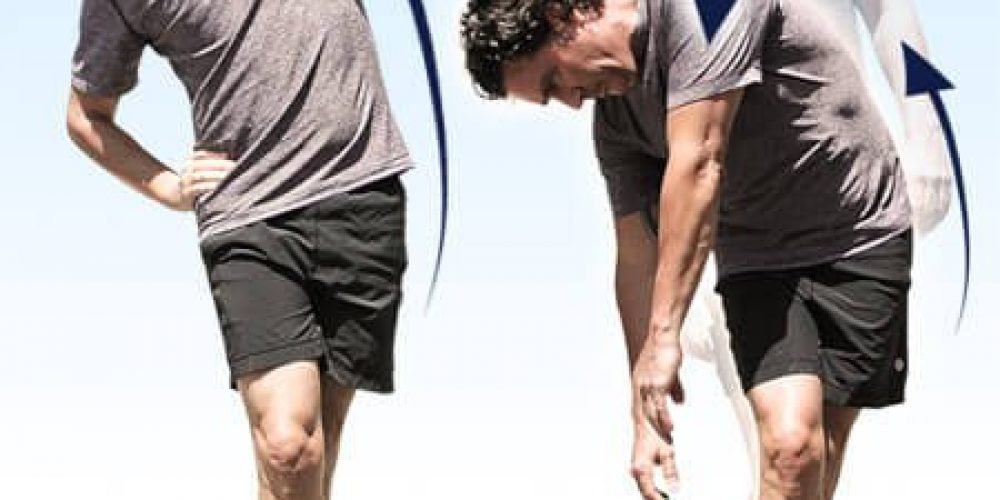 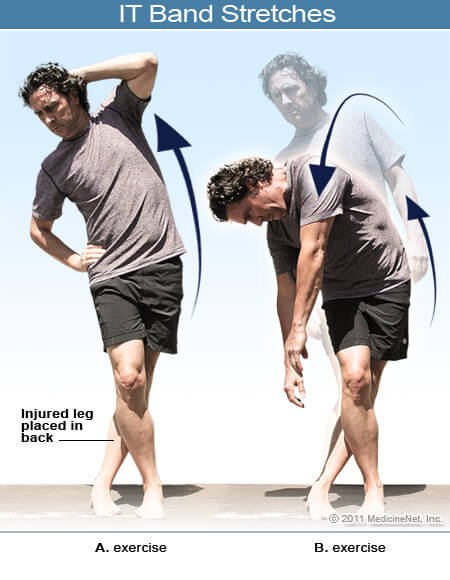 A. Hands are held on the waist, and the injured leg is crossed behind the good leg. B. The arm on the same side as the injured leg sweeps up and over as the hips are moved laterally toward the good side, allowing a lateral bend at the waist. There should be no twisting with this stretch and no need to touch the foot of the injured leg.

What is iliotibial band (IT band) syndrome? 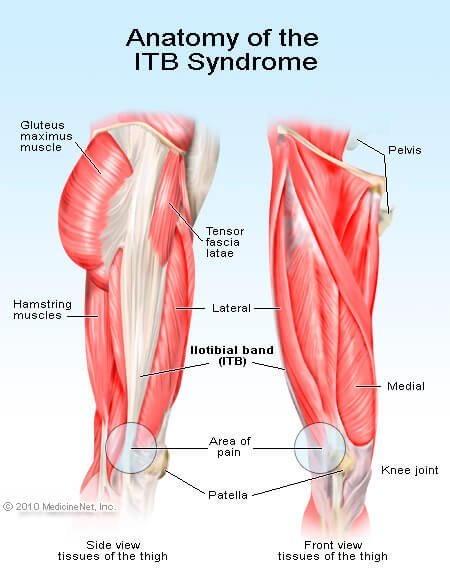 Picture of the iliotibial (IT) band

The iliotibial band is a thick band of fascia (tissue) that begins at the iliac crest in the pelvis, runs down the lateral or outside part of the thigh, and crosses the knee to attach into the top part of the tibia or shinbone. It forms from the tensor fascia lata and two of the gluteal muscles (gluteus medius and gluteus minimus) in the buttock and then stretches across the knee. The iliotibial (IT) band helps stabilize the outside part of the knee through its range of motion.

When the knee is flexed, the IT band is located behind the femoral epicondyle, a bony outcropping of the femur or thighbone at the knee joint. The IT band moves forward across the condyle when the knee is extended. There is a sac or bursa that allows the band to glide smoothly across the condyle, but should inflammation occur in this area, the increased friction from repeatedly rubbing the iliotibial band across the bony condyle can cause pain, especially along the outer (lateral) aspect of the knee joint.

If the symptoms are ignored, the inflammation can continue and scarring develop in the bursa, decreasing knee range of motion and causing increasing pain with decreasing activity.

Pain can also occur in the knee from diseases or conditions that involve the knee joint, the soft tissues and bones surrounding the knee, or the nerves that supply sensation to the knee area. Overuse injury to the knee can lead to inflammation of the tendon below the kneecap (runner’s knee or jumper’s knee with infrapatellar tendinitis) and bursitis.

Read more about symptoms and signs associated with knee pain »

Iliotibial band inflammation is an overuse syndrome that occurs most often in long-distance runners, bicyclists, and other athletes who repeatedly squat. The iliotibial band syndrome may be the result of a combination of issues, including

There can be a predisposition to develop IT band syndrome. Anatomy issues may include differences in the lengths of the legs (a leg-length discrepancy), an abnormal tilt to the pelvis, or bowed legs (genu varum). These situations can cause the iliotibial band to become excessively tight, leading to increased friction and irritation when the band crosses back and forth across the femoral epicondyle during activity.

Training errors may cause runners to develop iliotibial band syndrome symptoms. Roads are canted or banked with the center of the road higher than the outside edge to allow for water runoff. If a runner always runs on the same side of the road, it produces the same effect on the body as having a leg-length discrepancy. One leg is always downhill compared to the other, and the pelvis has to tilt to accommodate the activity. Running too many hills can also cause inflammation of the IT band. Running downhill is especially stressful on the IT band as it works to stabilize the knee.

Bicyclists may develop IT band inflammation should they have improper posture on their bike and “toe in” when they pedal. The issue may be how the toe clips are aligned, forcing the foot to be internally rotated, toed in. This can cause the same effect as bowed legs, increasing the angle of the IT band as it crosses the knee and increasing the risk of inflammation.

Other activities with increased knee flexion can cause symptoms and include rowing and weight lifting, especially with excessive squatting. 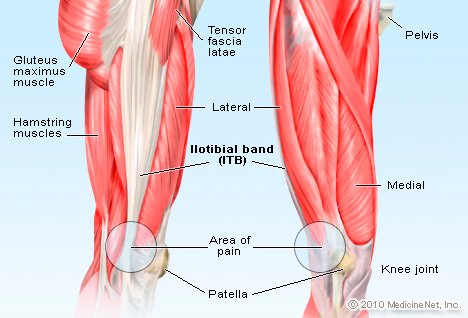 What are iliotibial band (IT band) syndrome symptoms and signs?

Often, the diagnosis of iliotibial band syndrome can be made by the patient’s story of symptoms. The patient describes the progression of lateral knee pain that is made worse when the heel strikes the ground. Physical examination is helpful because the area of pain can often be palpated with tenderness and swelling felt over the femoral epicondyle, where the bursa or sac is located.

The health care professional may also look for leg-length discrepancy, muscle imbalance, and tightness in the legs and back. There is tenderness of the outer thigh just above the knee joint, while the knee and hip joints themselves are normal to examination.

Usually, a full physical examination of the low back and legs, including the hips, knees, and ankles, is performed to detect other potential causes of lateral knee pain.

Plain X-rays are not usually required to help with the diagnosis, but MRI may be used to look for inflammation surrounding and beneath the iliotibial band. The MRI can also exclude other causes of outer knee pain. These include torn cartilage (lateral meniscus tear), sprained lateral collateral ligament, muscle tendon inflammation, and problems between the kneecap and the femur (patellofemoral pain). Most often, X-rays and MRI images are not needed.

What is the treatment for iliotibial band (IT band) syndrome?

It is unusual that the conservative nonsurgical treatment fails to help. However, orthopedic surgery may be an option for patients who fail conservative (nonoperative) treatment.

Before surgery is considered, other potential causes of lateral knee pain are usually considered. These include lateral meniscus tear and chondromalacia. 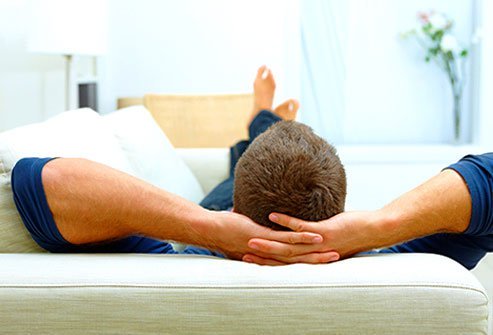 What stretches and exercises are beneficial for iliotibial band (IT band) syndrome? 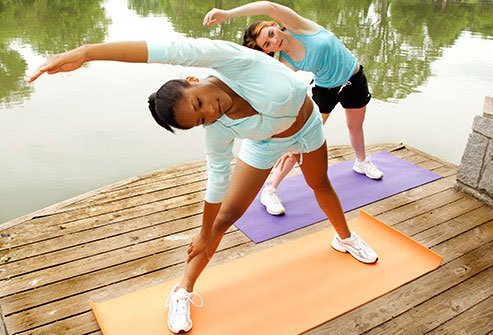 What exercises should be avoided with iliotibial band (IT band) syndrome?

Most patients recover from iliotibial band syndrome, but it can take from weeks to months to return to full activity without pain. Patience in allowing the body to heal is required for optimal results.

Understanding the importance of symmetry in the body is helpful in preventing iliotibial band syndrome. When activities alter that symmetry, symptoms may occur.

Symptoms may occur in runners who always run in the same direction on an indoor track or who always run on the same side of a banked road. This causes an artificial tilt to the pelvis and increases the risk of developing inflammation and pain. When running indoors, it is wise to change directions when running longer distances. Some tracks have the runners change directions every few minutes while others change direction on alternate days. While running toward traffic is an important safety strategy, finding a way to run on the opposite side of the street safely may minimize the risk of developing iliotibial band syndrome.

Bicyclists are at risk for iliotibial band syndrome if they tend to pedal with their toes turned in (internally rotated), which can cause abnormal stretching of the iliotibial band at the knee. Being aware of pedaling technique and setting the pedals and clips properly may minimize the risk of developing symptoms.

Keeping muscles and other structures stretched is an important part of prevention of many musculoskeletal injuries, including iliotibial band syndrome.

Where can people find more information about iliotibial band (IT band) syndrome?

Iliotibial band syndrome is a common runner’s affliction. Often a local running store will be able to provide information about the signs and symptoms of the injury, including area health care professionals who can help runners and other athletes.