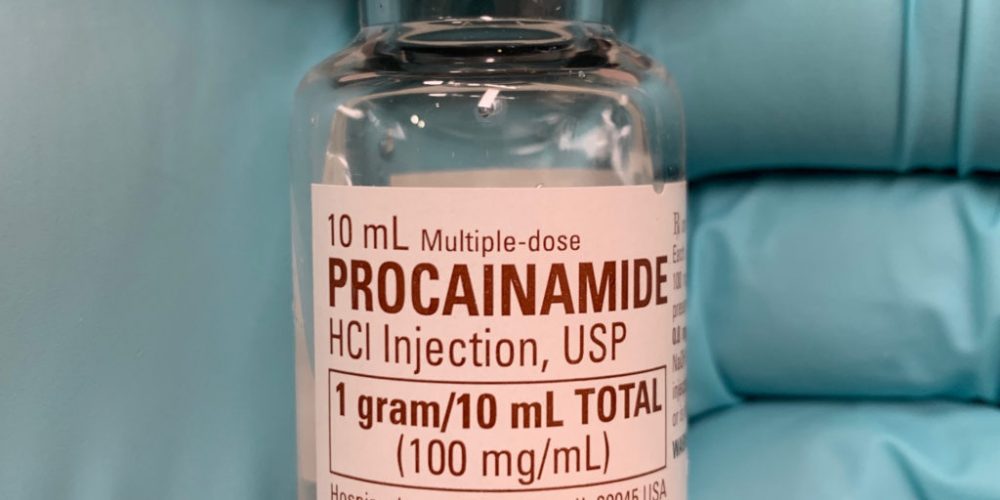 Procainamide is a type IA antiarrhythmic which prolongs repolarization via sodium channel blockade. This is achieved by slowing conduction through the ventricular His-Purkinje system thereby widening the QRS complex (and ultimately the QT interval).

As a cardiac anesthesiologist, I most often use procainamide when coming off cardiopulmonary bypass if patients are in a stable atrial fibrillation/flutter (often times I can see the right atrium fibrillating in the operative field) since procainamide slows the atrial rate and has a direct vagolytic effect on the AV node. The net effect is that more atrial impulses are actually conducted through the AV node resulting in normal A-V firing.

As far as “board questions”, procainamide is associated with bone marrow toxicity and drug-induced lupus (as are medications like isoniazid and hydralazine). Furthermore, in patients with atrioventricular accessory pathways as seen in Wolff-Parkinson-White (WPW) syndrome, atrial arrhythmias should be treated with procainamide or cardioversion rather than traditional rate control meds like beta-blockers or calcium channel blockers as these may promote conduction through the accessory pathway.