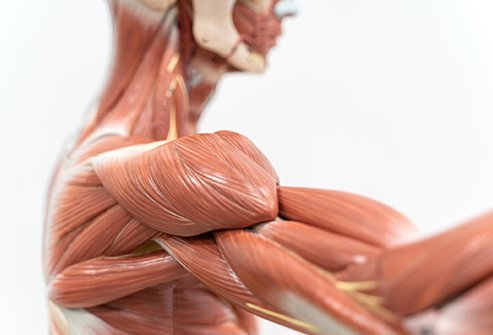 Rhabdomyolysis (RAB-DOE-MY-O-LIE-SIS) is the rapid destruction of skeletal muscle resulting in leakage into the urine of the muscle protein myoglobin.

There are three different types of muscle in the human body;

Myoglobin is a protein component of the muscle cells that is released into the blood when the skeletal muscle is destroyed in rhabdomyolysis. Creatine kinase is an enzyme (a protein that facilitates chemical reactions in the body) also in the muscle cells. The level of each of these proteins can be measured in blood to monitor the degree of muscle injury from rhabdomyolysis. Myoglobin can also be measured in samples of urine.

What are the symptoms of rhabdomyolysis?

The muscle damage causes inflammation leading to tenderness, swelling, and weakness of the affected muscles. The dark urine color is due to myoglobin being excreted in the urine by the kidney as it tries to rid the body of the muscle breakdown products.

Symptoms related to the expected complications of rhabdomyolysis include:

Read more about these the causes and symptoms of rhabdomyolysis »

Rhabdomyolysis has many causes. Some of the common ones include:

What are the symptoms of rhabdomyolysis?

What should I do if I think I have rhabdomyolysis?

If you have signs and symptoms suggestive of rhabdomyolysis, your doctor needs to be notified promptly. It is important to realize that these symptoms are not specific for rhabdomyolysis as they may be caused by other conditions.

How is rhabdomyolysis diagnosed?

Of note, CPK is also in heart muscle (cardiac muscle) and brain. The laboratory is usually able to distinguish between the different components of this enzyme. For example, the fraction coming from skeletal muscle is referred to as CK-MM and the one from heart muscle is designated as CK-MB. There are small amounts of the CK-MB component in the skeletal muscle as well.

What are the complications of rhabdomyolysis?

How is rhabdomyolysis treated?

The treatment of rhabdomyolysis depends on its cause and severity.

If a cause for rhabdomyolysis is identified, it is addressed; for example:

In cases of mild rhabdomyolysis without any evidence of complications, management can take place at home by simply recognizing the cause and correcting it, such as discontinuing a medication and rehydration.

In more severe cases, or if home therapy is not possible, hospitalization may be required. Prompt initiation of hydration with intravenous fluids, in addition to the removal the provoking factor(s), is an essential part of the treatment of rhabdomyolysis. Monitoring and managing kidney dysfunction, correcting any disturbance in the electrolytes, and monitoring the muscle enzyme levels (CPK, SGOT, SGPT, LDH) are most effectively done in the hospital when rhabdomyolysis is severe.

What is the prognosis for rhabdomyolysis?

Clinical manifestations and diagnosis of rhabdomyolysis.